Aaron is excellent at planning trips. This winter, while the snow lingered on, he found the perfect spot for our summer vacation. Requirements for the trip were: 1) Somewhere in northern Michigan. 2) Somewhere close to the beach. 3) Somewhere simple where we could spend lots of time with our girls.

Traverse City is a favorite place of ours, but renting a house anywhere near Traverse is pretty expensive. For a fraction of the cost, you can stay in a beautiful house on Beaver Island. As a bonus, you get to experience life away from the mainland. (That’s where the simple part comes in.) We love adventures, and this sounded like the perfect one for our family!

After nine years of marriage and five years of having children, I am finally learning that packing early significantly reduces the stress of your departure. I started packing five days before we left and had the last three days completely blocked off for packing and preparing for the trip. One thing I hadn’t planned for was the stomach flu (for Kayla and Madeline), but thankfully it was just a 24-hour bug this time.

Believe it or not, we actually needed all that time to get ready to go. The packing list was quite extensive! My mom came up the day before we left and entertained the girls, which definitely helped me a ton.

The morning of June 27 we departed peacefully and headed north to Charlevoix. We enjoyed lunch overlooking the channel and then boarded the ferry (the van included). The girls loved the boat, and I’ll admit it was a pretty nice way to travel. 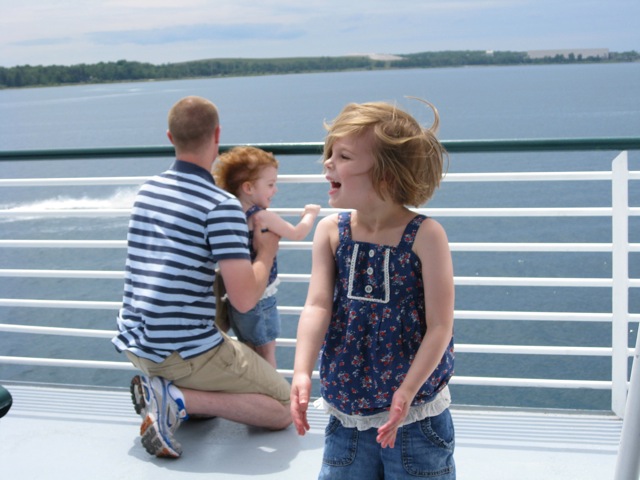 Two hours later, we arrived in the small town of St. James on Beaver Island, picked up a pizza and drove to the vacation house on Donegal Bay. It took a while for excited little girls to settle down, but eventually we all drifted off for a good night of sleep.

Our adventure the next morning was grocery shopping. The island has a Spartan store that carried most everything we were looking for. Prices were a little steep (they had no sale items), but I suppose that’s what you would expect when you’re in the middle of Lake Michigan.

We had one day of summer weather before it turned cold. We spent that day on the beach, enjoying the sand, the lake and the sun. 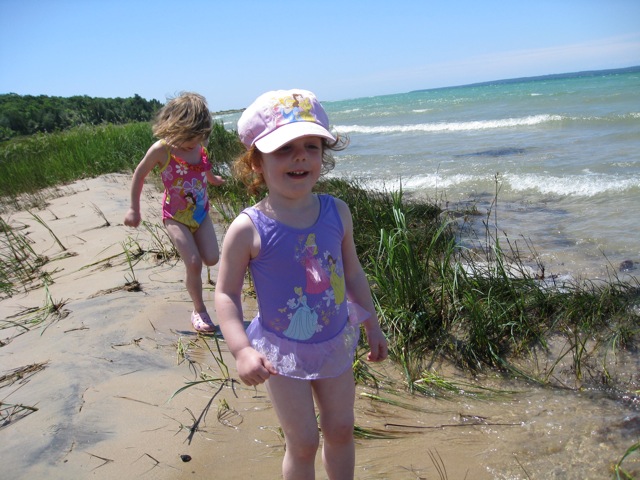 The next day was adventure-around-the-island day. Our first stop was the Paradise Bay Coffee Shop for lattes and candy necklaces (a winning combination). We stopped by CMU’s Marsh Area but decided to skip the hike due to the rain. 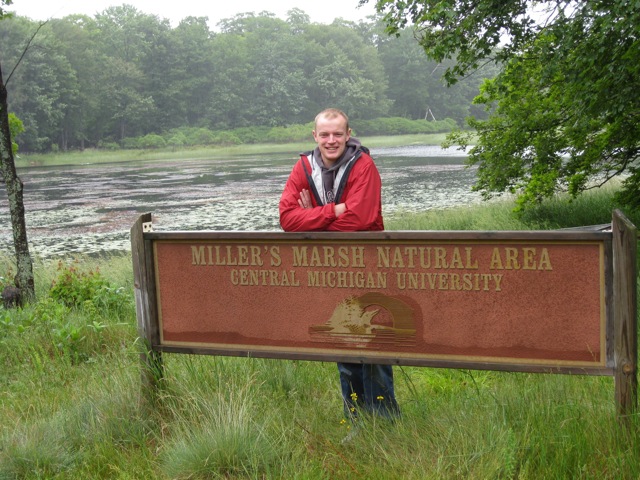 We continued driving around the southern part of the island, past the lighthouse and headed along the eastern shore. When we stopped by CMU’s biological station, amazingly enough, Aaron saw two of his coworkers (they were installing a time clock). As they say, it’s a small world after all.

Here is a picture of the girls and me when we stopped for a very short hike through a forest. The mosquitos were thick! If you look close enough, maybe you’ll see some in the photo. Just kidding. 🙂 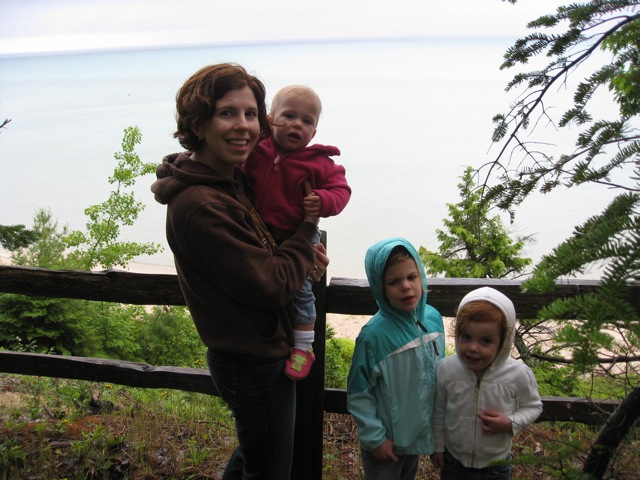 Some of the days were pretty cloudy and cool, but we really weren’t disappointed. We had plenty of time playing in the sand, and we had some great times playing indoors as well. Favorite indoor activities included coloring, reading, playing Go Fish and acting out stories. I really should have taken some video of Aaron pretending to be Ursula. He continues to amaze me with his abilities to engage and connect with children! 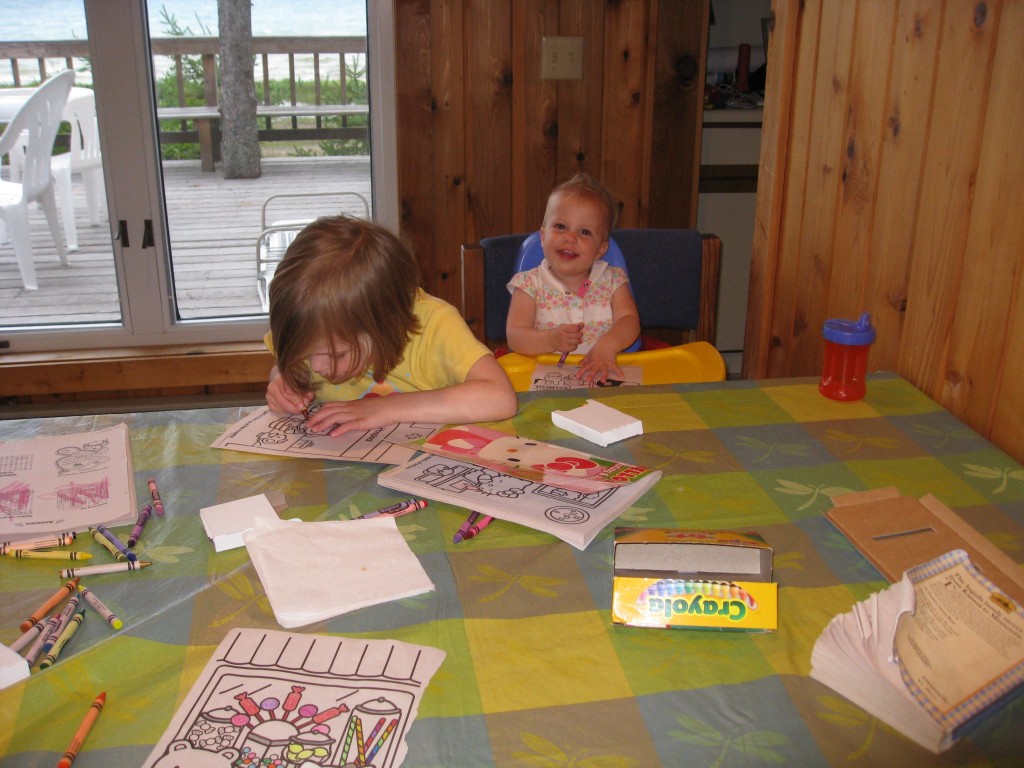 One afternoon our adventure was a trip to the sand dunes. We actually didn’t have to travel far—it was just minutes from where we were staying. Here’s Aaron carrying Madeline to the top. Don’t you love the outfit? 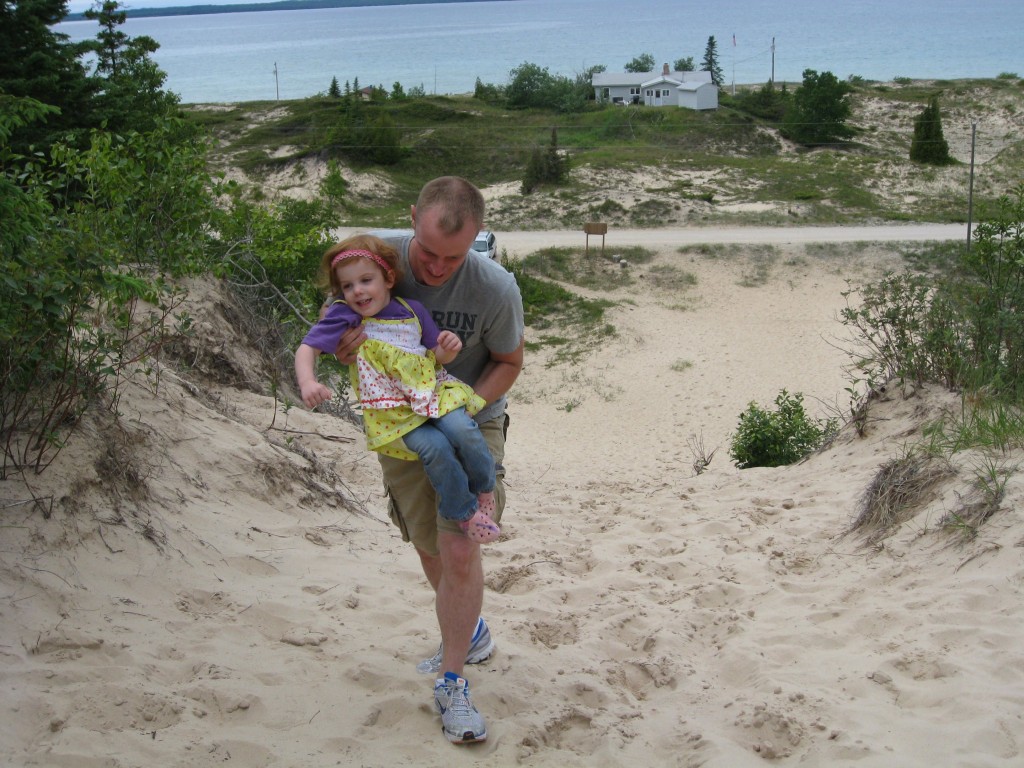 We had visitors our last day on the island—Aaron’s parents. Kayla, Madeline and Savannah were so excited to see Grandma and Grandpa’s ferry arriving! You would have thought they hadn’t seen them for a year. Notice Madeline’s outfit once again. 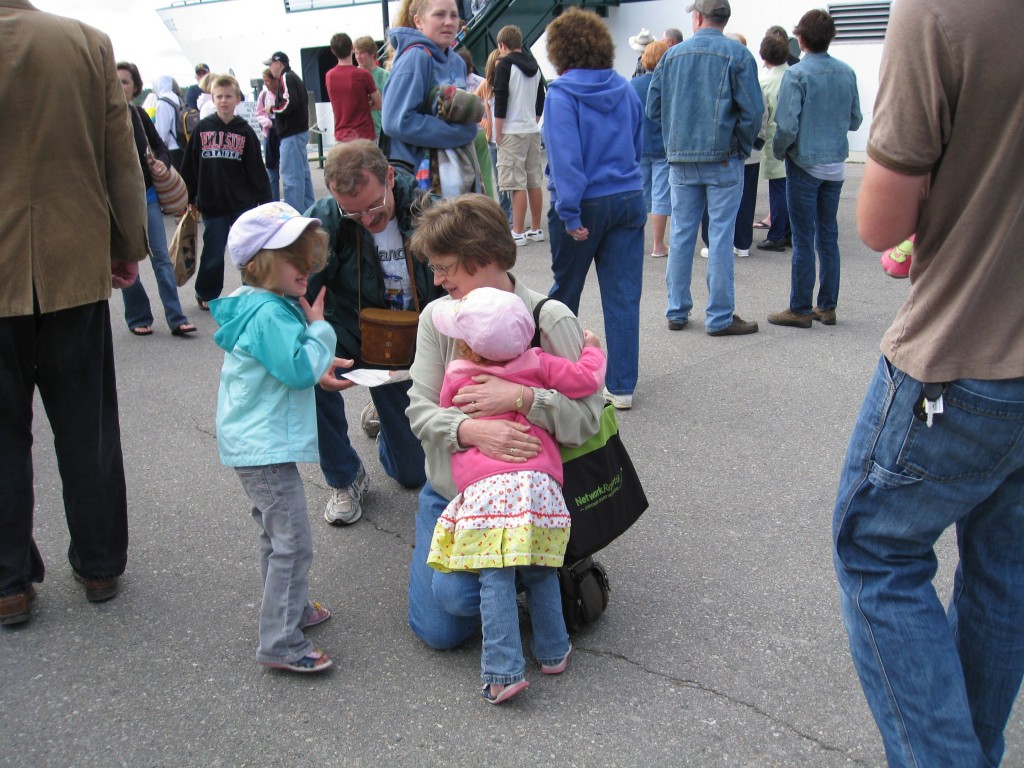 The one thing that was slightly disappointing about the trip was the lack of sunsets—supposedly one of the highlights of staying on Donegal Bay. We stayed for seven nights, and the clouds blocked the sunset six nights in a row. Alas, for our final night, God sent us a very special sunset. Kayla and Madeline thought it was pretty cool. 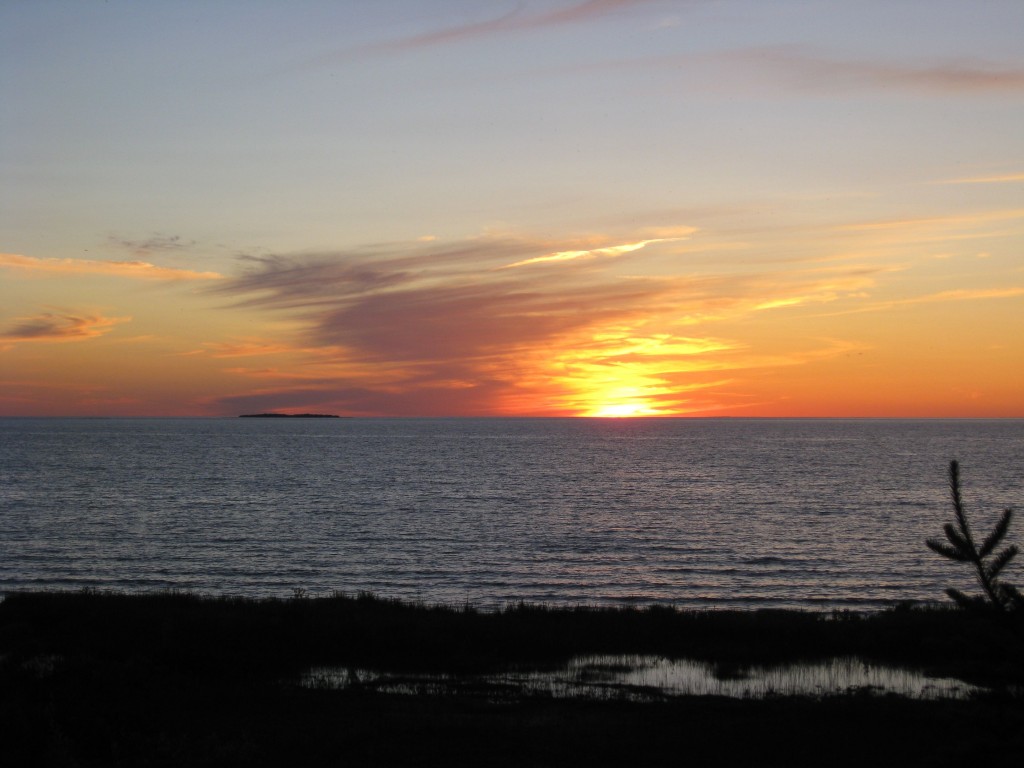 The morning of July 4, while everyone on Beaver Island was preparing for a parade, we headed back to the mainland. Here’s Savannah with her souvenir, “Kitty.”

Kayla and Madeline had one last adventure before arriving home: camping with my mom near at Wilson State Park. They even got to see fireworks on the 4th, something Aaron, Savannah and I missed.

But I’m old enough to know that the sense of balance I experienced yesterday, that feeling of being settled, could not stay. Savannah woke this morning with a high fever and blisters. Our good friend from last fall, hand-foot-mouth disease, is back.

So continues life with little ones …