I’ve been meaning to write this for a while, but there never seems to be a good time.  Tonight I decided to give up an hour of sleep so I could tell the story of Jonah’s birth.

Jonah was due Thursday, March 27.  Since he hadn’t arrived yet, we spent his due date with some of our favorite homeschooling friends.  They brought lunch, and we had a fantastic time together as usual.

That night, however, things didn’t go as we hoped.  Sophia started throwing up.  When stomach viruses hit our family, life can be crazy.  Rarely is only one person affected, and sometimes it takes two to three weeks before everyone is back to normal.

Sophia continued throwing up until March 31.  That day, a Monday, Aaron took the girls to their dance classes while I stayed home with Sophia.  Besides throwing up in the morning, she was actually feeling quite well.  While Kayla and Madeline were at their class, Savannah, Sophia and I finger-painted.  It was also a gorgeous spring day, so we spent a lot of time on the deck.  Too much spring sun or heat often means hives for Kayla, and sure enough that’s exactly what happened later that night.  Kayla had also broken out in hives the morning Savannah was born, caused by a warm bath the night before.

That night I went to bed close to 11:00 but only slept a few minutes before waking up again.  I felt hungry and wide awake, so I had a small snack and read until I felt tired.

Waking up in the Night

At 2:20 a.m., I heard Sophia crying over the monitor.  Aaron checked on her, took her to the bathroom and came back to bed.  I was surprised she needed to go potty, because she started staying dry at night shortly after turning two.  At 2:45 she woke again.  This time Aaron brought her to the upstairs bathroom, and I knew something was wrong.  Sophia had diarrhea, but then another funny thing happened.  My water broke!  I started shaking and feeling nervous because from past experience I knew what that meant:  we were going to have a baby, and we were going to have him fast!  My water broke at the start of labor with Kayla, and she was born less than six hours later.  Also from experience, I knew that labor contractions after my water has broken are much more painful and intense.  I had a feeling I was in for a short, intense labor.

I called my midwife shortly before 3 a.m.  She advised me to shower and then try to fall back asleep.  I also wanted to email to some friends, asking them to pray for a smooth birth.  I sent the email at 3:47 a.m., right around the time my contractions really started picking up.

Falling asleep wasn’t an option anymore, because my contractions were close together and strong.  I tried to watch the movie I had planned to watch during labor—Dan in Real Life—but didn’t get very far.  12 minutes into the movie we paused it because labor was quite intense.  During that time I also ate a popsicle, another thing I had been planning to do during labor.  It made me feel nauseous.  I battled with nausea during most of my labors, so that was nothing new.

At 5:15 I called my midwife again.  I told her things were moving fast and that I was ready for her to come.  She arrived just before 6:00, got settled in, and then checked to see my progress.  When she said I was about seven centimeters dilated, I felt a bit discouraged because I knew I still had transition ahead of me.  But a few seconds later she said, “Eight!”  Then I felt encouraged because I knew that if I could dilate one centimeter during one contraction, it probably wasn’t going to take much longer.

There’s no way else to say it:  the end is hard.  The pressure is intense.  Everything in you wants to get the baby out of your body!  But thankfully it lasts such a short time.  Jonah was born smoothly at 6:44 a.m.  He arrived five days late on April 1, 2014.  April Fools’ Day was the one day we hoped to avoid, but oh well!  Things like that don’t matter anymore once you have a beautiful baby in your arms.  It took a few minutes for Jonah to be a nice pink color, but thankfully there were no complications with his birth.

The girls slept through his birth.  Sophia was the first to wake up around 7:45.  Unfortunately she woke up pretty cranky from not feeling well and not getting enough sleep.  After she met Jonah, Aaron went to wake the other girls.  They were super excited!  We also called Aaron’s parents and asked them to come to get the girls.  But we didn’t tell them we had already had the baby!  That was a fun surprise.

The day of Jonah’s birth was the last day of Sophia’s stomach virus, but unfortunately Savannah came down with it on April 2.  Aaron and I were juggling the needs of five kids—one who just overcame a virus, one who was throwing up and one newborn who wasn’t happy with the spicy food I ate for dinner!

Life has settled down now, but our home is always active!  Jonah is such a precious ball of joy.  We adore him and thank God for knowing our family needed him!  He’s such a great addition! 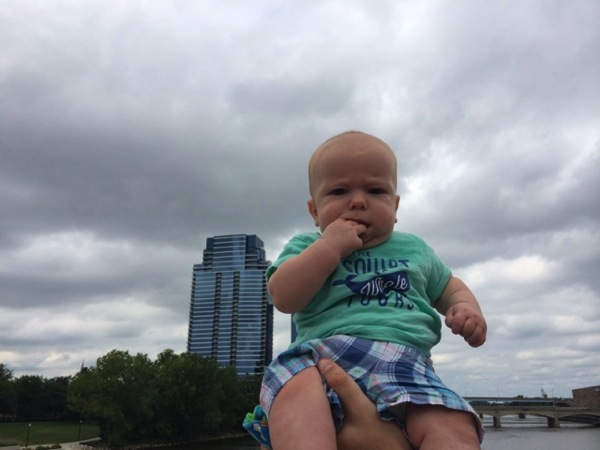 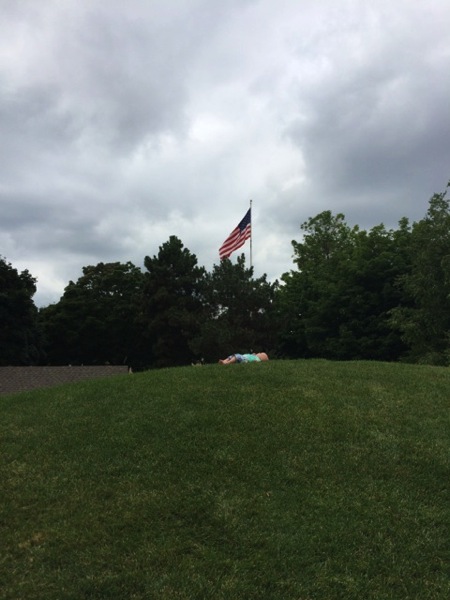 It was a little bright for Jonah, plus he was quite tired.  I thought it was a cute photo anyway. 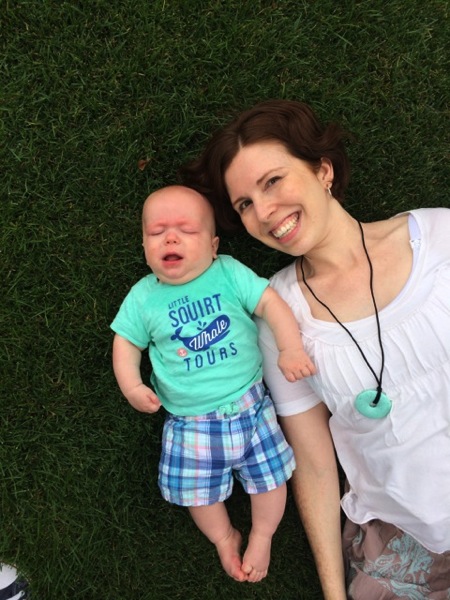 Just have time for a quick update with pictures of Jonah.  It’s hard to believe he’ll be 3 months old already tomorrow! 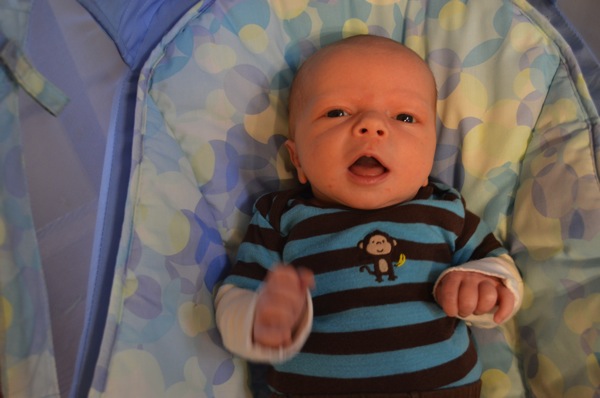 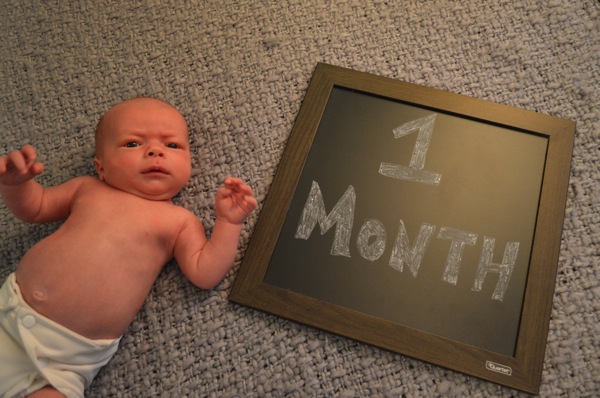 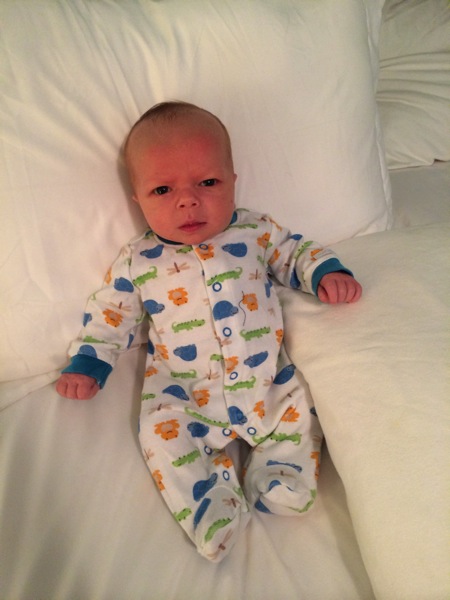 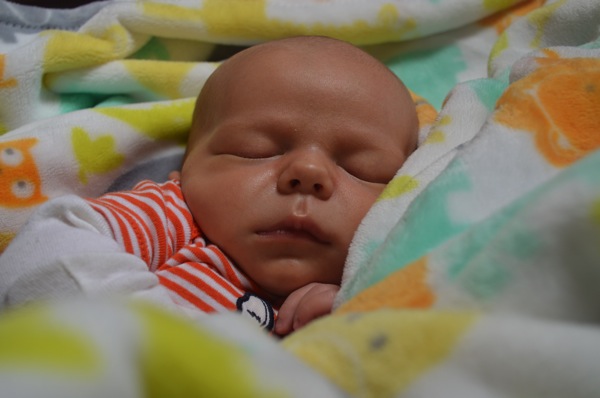 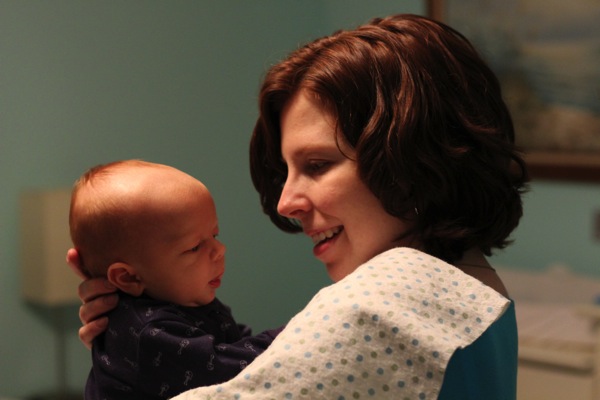 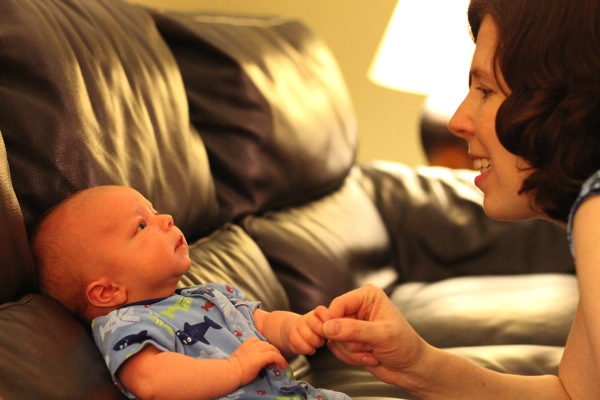 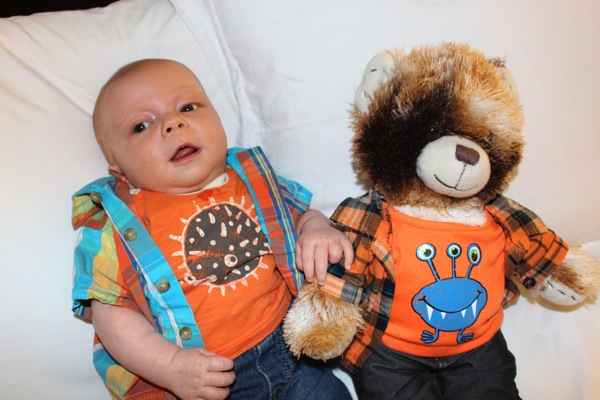 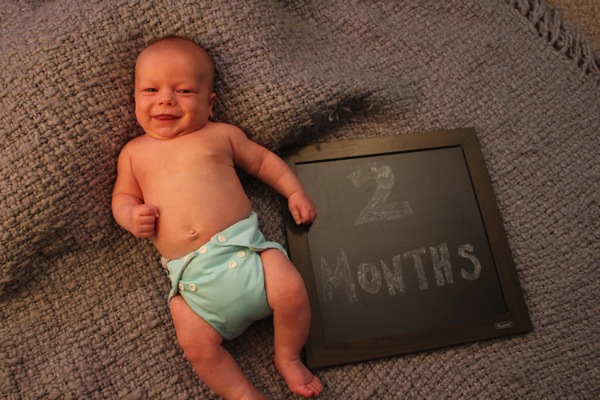 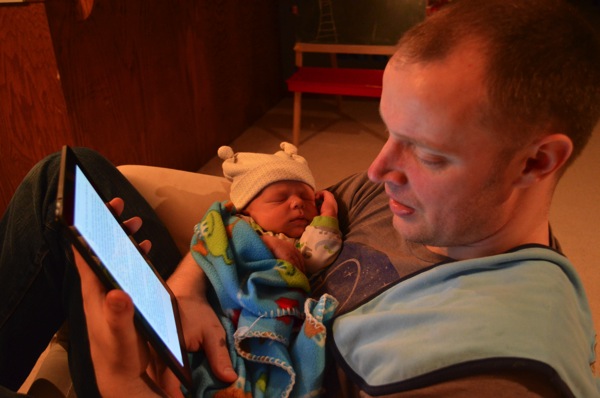 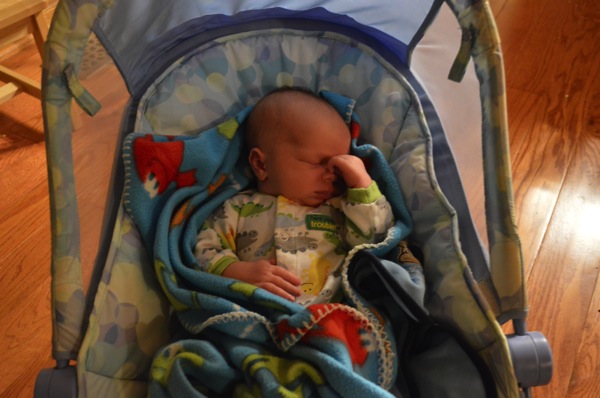 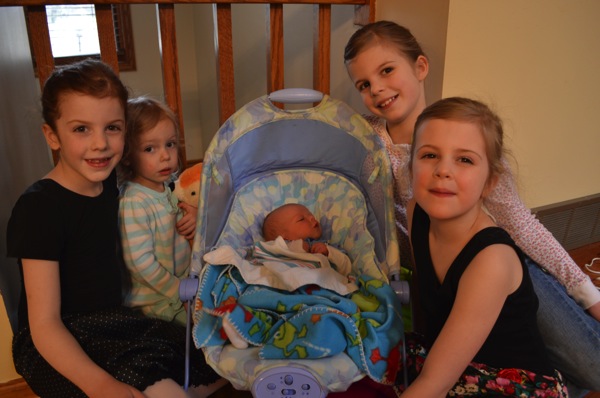 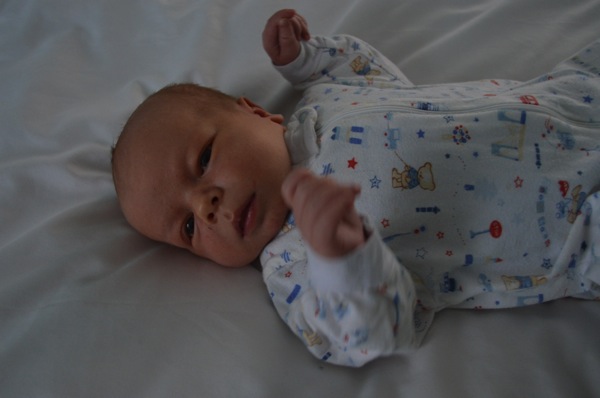 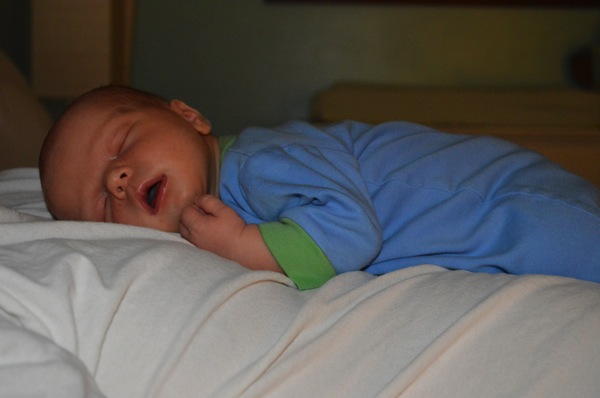 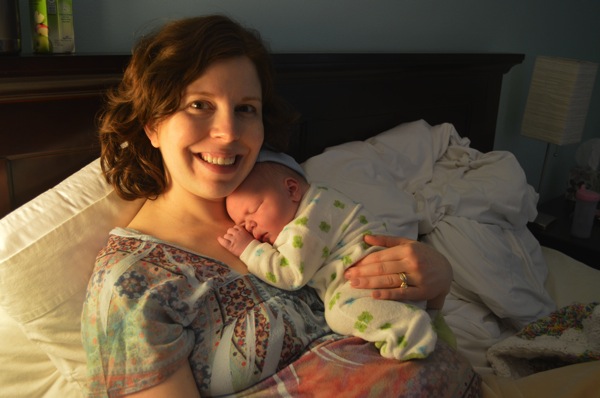 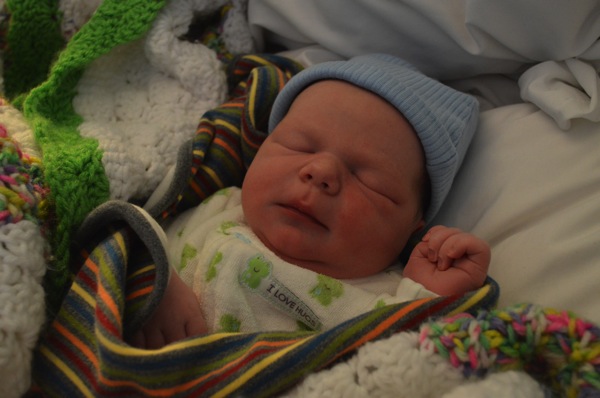 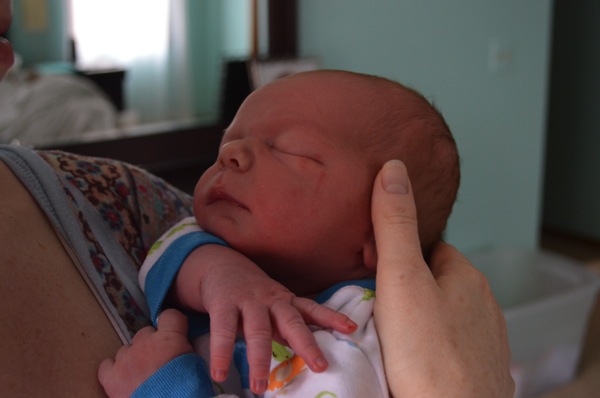 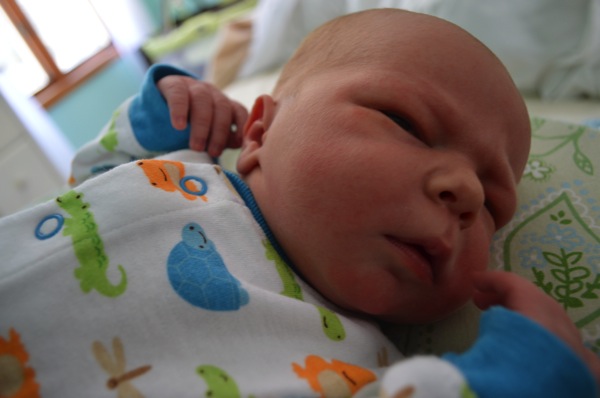 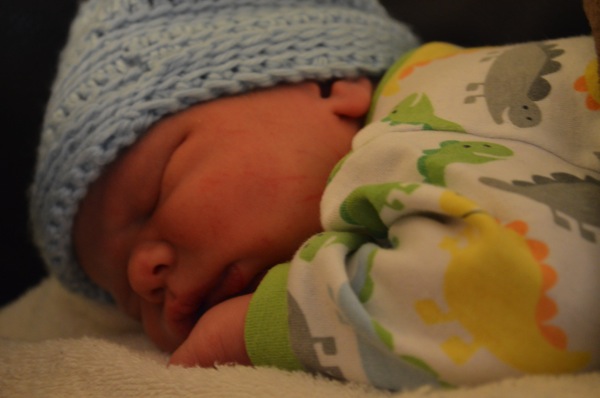 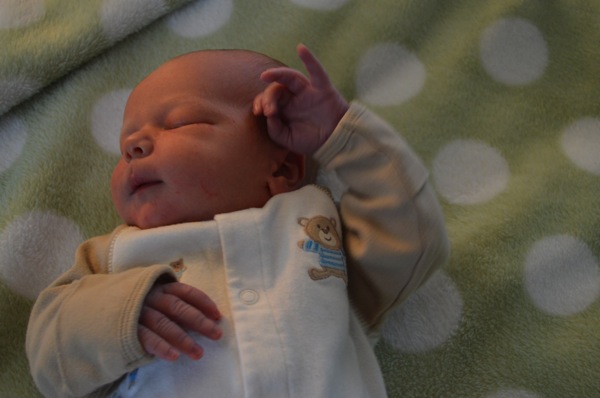