I captured this picture of Savannah last week because it reminded us of a library book.  Right now we have a booked checked out called “Books are for Eating.”  In the book the big sister says, “I know books are for reading, but Alex (her baby brother) thinks that books are for eating!”  The book continues with many scenarios.  One that always makes the girls laugh is when the baby brother thinks the clean diapers are for rolling in!  Apparently Savannah thinks the same.  She stood at the coffee table where they were nicely organized, tossed them on the floor and then rolled in them.

Speaking of cloth diapers, I’m very excited that Fuzzi Bunz now makes a one-size pocket diaper!  We’ve been using Fuzzi Bunz for almost a year and love them!  However, one draw back in recommending them to other people was that they had different sizes.  (You would buy a set of smalls for your newborn and then a number of months later turn around a buy a set of mediums.)  I doubt we’ll invest in any more diapers at this point (we have a good supply), but now I will be even more likely to recommend the Fuzzi Bunz brand to my friends.

If Savannah looks a little less than happy in this picture, it’s probably because she had a rough week last week.  On Sunday she started a fever which ranged between 102 and 104 and lasted for three full days.  We took her to the doctor and the PA diagnosed her with an ear infection.  Within a half hour of arriving home from the doctor’s office, she started throwing up and had 36 hours of vomiting and diarrhea.  She also broke out in a familiar rash, and I’m now pretty sure she also had roseola!  (I remember the rash from when Kayla and Madeline had it.)  Roseola, an ear infection and a stomach virus all in one week—poor thing.  And without further adieu, here is Savannah rolling! 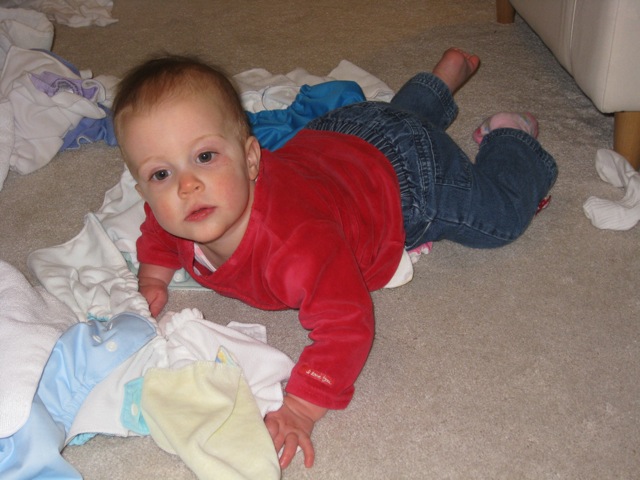