I intended to title this post “Pregnancy Picture” with a recent photo, but the ones we took a few days ago turned out so badly that I couldn’t post it. So I decided to write about Kayla instead and post a pretty picture of her. 🙂

Kayla has been so much fun lately. Her sentences are growing longer and longer; she’s adding words like too, this, his, etc. to her vocabulary. Another word she says often is please. She’s been saying it for a long time, but recently she’s really grown into a polite little girl. What a blessing that is to us.

Another neat thing Kayla’s been doing recently is asking to pray about everything! It’s so awesome. When Kayla was about 16-months-old, I made a video for Baby Church of her and a boy named Chase. The video gives three examples of Chase sinning–not sharing, pushing and disobeying his mom. After each segment, I stopped the video and explained to the kids that Chase had sinned and that we needed to pray to Jesus to “get that sin out!” Well, Kayla has watched that video hundreds of times since then (it’s incredibly short), and she’s definitely made the connection that she can pray for help when she’s struggling with a sin. So anytime Kayla misbehaves–fighting us in a diaper change especially–she says “pray!” and folds her hands. So we pray and ask Jesus to help us. Usually Kayla will change her behavior, but sometimes she’ll continue fighting us and asking to pray about four times in a row. She also wants to pray whenever she sees anyone else disobey, including animals in books or characters in the Bible.

Well, here is a picture of the pretty girl: 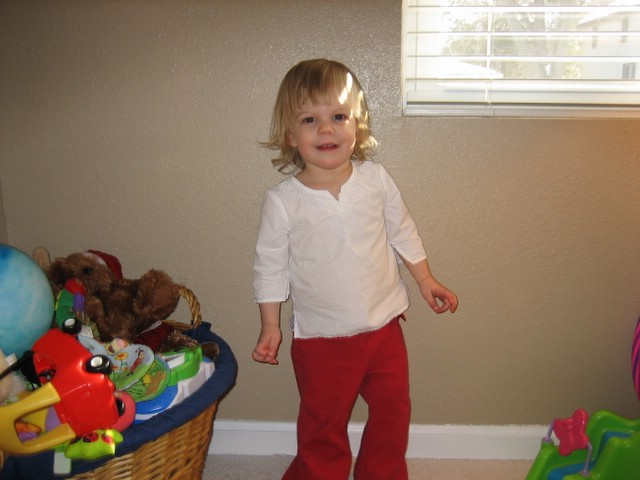