One of the drawbacks of being the second child is you end up having to rely on hand-me-downs for a lot of your clothes or toys.  Madeline has never seemed to mind much; she doesn’t really know the difference.  And we certainly have no shortage of stuffed animals around the house.  But the other night, we found one that was hard to pass up…We have a Kohl’s in our town.  When it first opened, we went there pretty often.  There are not a lot of fun places to shop in Mount Pleasant.  Kohl’s offered some variety–variety that included a fun little kids’ section with colorful toys and books.  But lately, we’d kind of forgotten about it and stopped going.

Needing something to do the other night, I had the idea that the family would go to Kohl’s.  So we packed up and headed over.  Just inside the front door was a large rack filled with stuffed dinosaurs.  Included was a cute blue Brontosaurus.  I picked it up and let Madeline hold on to it for a minute.  She wrapped her little arm around its neck and held it tightly.  We didn’t really see Madeline again that night without “Bronty” tucked under her arm.

We walked all over the store, Madeline carrying her dino everywhere.  She was willing to leave him there when it was time to go.  However, it was pretty obvious she was attached to him.  And although we didn’t need another addition to Mt. Stuffed Animals that resides in our living room toy basket, I couldn’t pass up the opportunity.  Here’s a picture from the next morning, after her first night snuggling with Bronty. 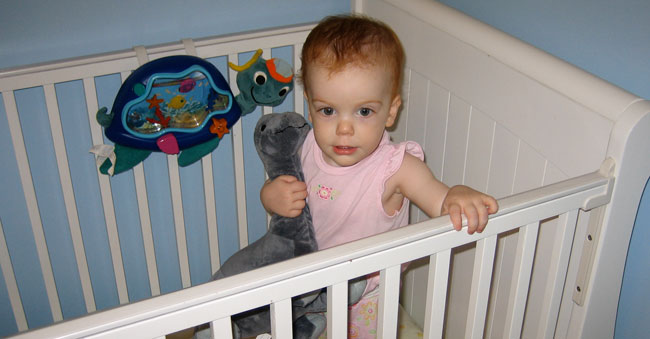