I’ve been meaning to write for a while now, but lately for some reason I just haven’t had much of a break from the wonderful little girlies!  They’re fabulous, but they certainly fill my days.  🙂

For part of Labor Day weekend, we took a short trip to Rainbow Lake with our friends Josh and Becky and their boys, Owen and Miles.  Kayla really likes hanging out with Owen, so she had a blast.  Here’s a picture of the two of them: 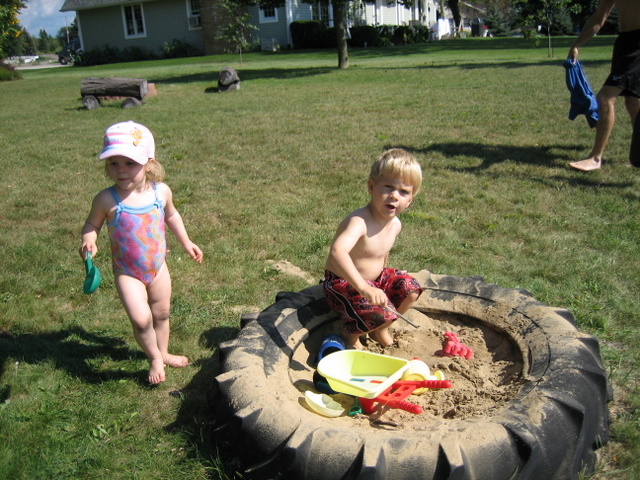 We stayed at Becky’s dad’s house.  He’s a big outdoorsmen and has been in Wyoming for the past month or so.  We gave Kayla a choice of where she wanted to sleep, and she picked the animal room.  It was complete with a moose, deer, foxes and some other animals that I can’t remember now.  It would have freaked me out to sleep in that room, but Kayla really liked it.  Aaron told me that when he was putting her to bed she said, “that moose sleeping.”  Apparently all her animal friends were sleeping, too.  🙂

The other funny story about our trip is that we all went to Lansing on Labor Day morning.  We went to the Eastwood Town Center Mall and visited a shoe store.  Owen and Kayla were pushing the little benches around.  Owen told me that his benches were plows, and Kayla told me she was moving hers together so that she and Owen could have a tea party.  How cute.  🙂

Madeline is a champion roller now!  She rolled from tummy to back before she was three months, and just last week she conquered the other direction.  She makes it look so easy and practices it ever time we set her down (including on the changing table, of course).  Here’s a cute picture of her: 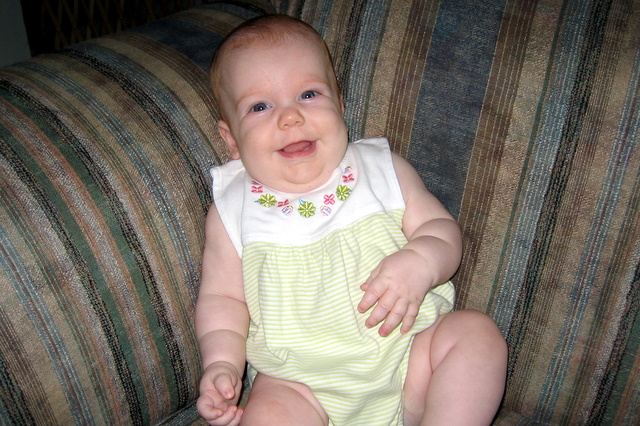 This is actually an old picture from August 2, but I just thought it was so cute.  Well, I’m off to another adventurous day with the little ones!